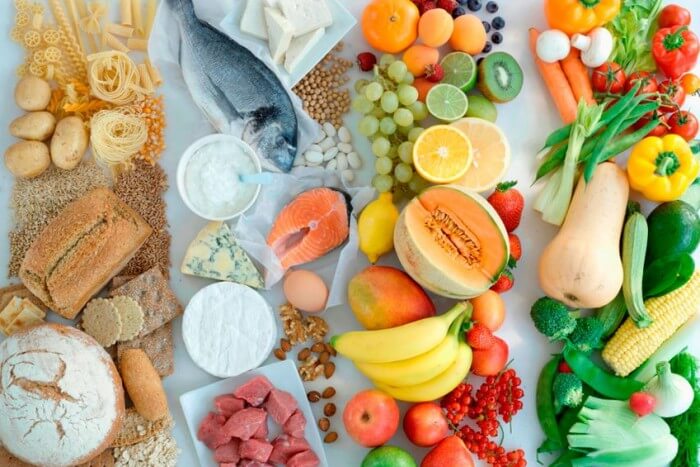 Food compatibility
There are many articles and books that do not recommend eating carbohydrates and proteins at the same time. This is the basis of the so-called separate eating system. It was developed at the beginning of the last century by the American Dr. Hay. It is based on the division of all foods into ‘acidic’ and ‘alkaline’, high-protein and high-carbohydrate. A special group is made up of ‘neutral’ foods, i.e. fats, dairy products, cheeses, nuts, berries.

Hay recommends eating alkaline foods (fruits and vegetables) for breakfast, protein foods for lunch, and carbohydrate foods for dinner. Foods in the ‘neutral’ group can be combined with others. The interval between meals is at least 4 hours, but fruit or vegetables can be eaten in between. In general, the consumption of proteins (and meat in particular) is limited in the separate eating system.

According to the proponents of this system, it helps to normalise metabolism, increase or decrease body weight, and also helps to fight diseases. Hay himself is said to have been cured of glomerulonephritis with it. However, for athletes, a separate diet is unlikely to be beneficial. Following such advice can be a significant drag on the growth of athletic performance. A developing body needs above all sufficient amounts of various proteins. Carbohydrates help ‘conserve’ protein, as it is used to build muscle tissue, not as an energy source. Protein slows down the absorption of carbohydrates, thus reducing their glycaemic index. As a result, blood sugar levels remain more stable. A similar interaction can be seen between fat and protein.

Breakdown of carbohydrates during digestion

The main factors necessary for breaking down fat in the digestive tract are the presence of enzymes that break down fat and the conditions for their optimal activity (pH), and the presence of emulsifiers to convert fat into a finely ground (emulsified) state. Such emulsifiers are bile acids (which are produced in the liver from cholesterol and enter the intestines with the bile).

The oral cavity lacks the necessary conditions and therefore chemical breakdown of fats does not occur. The stomach has a lipase with very low activity. This is due to the fact that the very acidic environment in the stomach (pH 1.5-2.5) suppresses lipase activity (pH 7.8-8.1) and there are no emulsifiers. Consequently, only already emulsified fats contained in milk and egg yolk can be broken down.

The main hydrolysis of neutral food fats takes place in the small intestine under the influence of active lipases. Medium in the intestine is slightly alkaline, i.e. optimal for lipase activity, which comes here with pancreatic juice.

Food proteins are not broken down in the mouth because saliva contains no hydrolytic enzymes.

Chemical breakdown of proteins begins in the stomach under the influence of proteolytic enzymes (peptide hydrolases) that break down peptide bonds between amino acids.

These enzymes are produced by the mucosal cells of the stomach, small intestine and pancreas in an inactive form. This form of enzymes prevents self-digestion of proteins in the cells where they are synthesized and the walls of the gastrointestinal tract (especially for those who are still delusional about the idea that the stomach digests itself during fasting).

Proteins that are not broken down in the small intestine are broken down in the large intestine by peptidases, which are synthesised by the microflora there. Enzymes of the microflora of the large intestine can break down many amino acids of food to form various toxic substances: phenol, cresol, indole, hydrogen sulphide, mercaptans and others. This transformation of amino acids in the large intestine is called protein putrefaction. The toxic substances are absorbed into the blood and transported to the liver where they are neutralised. The whole process of protein digestion in the gastrointestinal tract takes on average 8-12 hours after a meal.

The following is an obvious conclusion: it is not advisable to consume carbohydrates together with protein.

The stomach has a special sphincter called the gatekeeper of the stomach and it has a very curious function: it separates the pyloric part of the stomach from the ampulla of the duodenum and acts as a regulator of the intake of acidic gastric contents into the duodenum as it is ready to receive further portions of chyme (food mush).

Just because protein putrefaction is constantly observed in the large intestine of a “civilised” person does not mean that such a phenomenon can be considered normal. And putrefaction means smelly faeces, difficult stools, bloated stomach and gas.

To summarise, do the following:

First of all, eat all carbohydrates, chewing very carefully, because digestion will start while still in the oral cavity. Because of the acidic environment in the stomach, carbohydrates will not stay there for long, and by the time you reach the protein part, most of the carbohydrates will have already fallen into the intestines (it is better to pause for 15-20 minutes to be on the safe side).
Fats, as for nuts, muffins etc., are better eaten with carbohydrates, because an alkaline environment is needed and because lipids slow down gastric secretion, thereby inhibiting digestion. In cases where fat cannot be separated from protein, e.g. oil used in cooking, raw green vegetables can be used.

Protein, accordingly, comes last.
By dividing and eating in this order, you kill three birds with one stone:

I do not urge anyone to take the word of a physiology textbook, biochemistry textbook or even more so me personally, just try it and form your own opinion.